Plant a tree in memory of Gertrude
An environmentally-friendly option 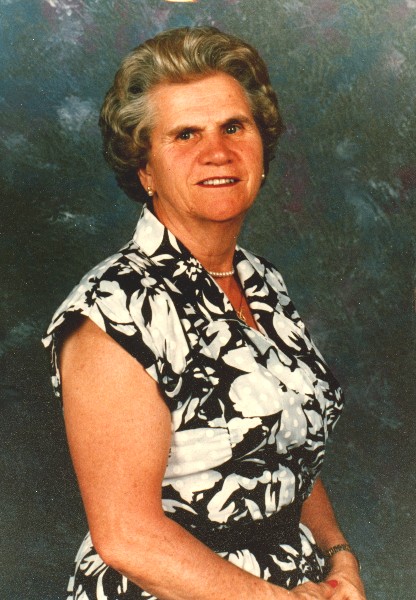 Gertrude “Gert" Hart, beloved wife of James “Jim" Hart, died peacefully at the home of her daughter Lena Fitzpatrick, where she had been residing for the past 9 months.

She was born on June 17, 1930 in Kerley's Harbour, Newfoundland; the fourth daughter of Frank and Leticia Miller in a family of 12 children. While she lived there, it was owned by England. So she was actually British. When Canada took possession, they abandoned the town and relocated anyone still living there. Gert's dad Frank was a fisherman and her mom Leticia was a homemaker. Gertrude and her siblings grew up in the village with all the other fisherman’s children, learning the ways of the sea and doing subsistence farming. Gert's mom Leticia passed away in 1954 and her dad Frank passed away in 1965.

In 1946 Gert immigrated to the United States with the assistance of her aunt, Ethel Anderson, to Massachusetts. She initially was bonded and lived and worked for the family that sponsored her as housekeeper, child caregiver and whatever. Once her bondage was over, Gert found employment at Champion Lamp in Lynn. Gert was a hard worker, characteristics instilled in her by her parents while living in a fishing village.

In 1947 Gert met her future husband Jim. She was working with his sister Catherine at Champion Lamp and she introduced them. In 1954 Jim became a police officer in the Lynn Police Department. Together Jim and Gert raised five children – Lena, Bill, Dan, Rob, and Linda. Jim retired from the Lynn PD in 1978 and they moved to Maine. They had a camp in Maine over the years and enjoyed it so much they bought land and built a home in Springvale.

Gert was always smiling, always a good friend, and was always thinking of others. While employed as a home health aide with a community group home for developmentally disabled adults, Gert would bring them to her home, allowing the clients to work on social skills and become more able to be a part of a community. She did not give up on the caring for others role. After she moved to New York, at the age of 78, she worked for seniors helping seniors, as an aide and companion, till at 82, she decided it was too much.

When Jim passed in 1990, Gert joined local senior groups and traveled. Gert loved to travel and her adventures took her worldwide. On one trip to Italy, Gert really liked a rug she saw while there. The locals there told her it would be difficult if not impossible to buy it and bring it home. Today that rug lies in the bedroom where Gert stayed with Lena!

Gert is preceded in death by her parents Frank and Leticia; siblings Olive, Annie, William, Joseph, James, Ethel, Frank, John and Sidney; and her husband of 42 years, Jim.

She is also survived by her very dear and special friend Philip Snyder, who was a great companion and source of comfort in her final years. A memorial service will be held in Maine along with final interment on June 19, 2021 at Notre Dame Cemetery in Springvale, Maine where she will spend eternity with her husband Jim.

Donations in lieu of flowers may be made to Hospice of Oneida, Herkimer, and Madison Counties of New York. They meant a lot to her in her final year. You may also donate to your local hospice if preferred. Arrangements to be made by Carll-Heald and Black Funeral Home, Main Street, Springvale, Maine.

Plant a tree in memory of Gertrude by clicking here.
To send flowers to Gertrude's family, please visit our floral store.

Plant a tree in memory of Gertrude
An environmentally-friendly option

Plant a tree in memory of Gertrude

1 tree planted in memory of Gertrude

A Memorial Tree was planted for Gertrude Hart

Plant a tree in memory of Gertrude